When I was a child, the beginning of March was always a magical and highly expected time of the year, partly because I never liked January and February. After the euphoria of December, they seemed to me like a perpetual Monday. March was the promise of good weather, Martisor  [Mərtsishor] (a talisman exchanged by people on the 1st of March in celebration of spring and the renewal of time) and the days of Baba Dochia [Dokia].

March is one of the months which accumulated many legends and lore related to time renewal and meteorology, some are more recent creations of folk magical patterns of thought while others are remnants of Pre-christian religious practices (like the Martisor or the Carnival).  From the weather point of view, March has aroused the imagination of peoples all over Europe in order to explain the temporary relapse of the cold weather and the capricious days of this month.

One of these legends, which can be found in various versions across many European cultures, is that of an old lady who defies March and takes her animals to graze against his warnings. March punishes her by turning the weather against her, thus killing her flock (in some cultures she dies together with her animals).

In my native culture she is called Baba Dochia and the beliefs and practices associated to her are the result of the superposition of old pagan beliefs (an old deity of fertility associated to the beginning of spring whose origin is lost, but might be related to the Roman festival of Matronalia which was celebrated on the 1st of March), Christianity (Dochia borrowed the name from St. Eudochia of Heliopolis) and the practice of magic / which craft (she has been endowed with the power to foretell the moral behavior of a person for the rest of the year). The first 9 days of March are called the Days of the Old Lady (Zilele Babei) and the custom is that people pick one of these days and the weather on that day will indicate how the rest of the year will go for that person.

In Bulgaria she is called Baba Marta and is celebrated on the 1st of March. In Eastern European Slavic cultures (Serbian, Bulgarian) these wintery weather days are called Babini Dini. In Greece the legend is similar: an old lady takes her herd of sheep and goats to graze and angers March, who asks February to lend him some days, making the weather so bad that the old lady and her sheep freeze to death and turn to stone. In some places megalithic anthropomorphic stones have been associated with this legend.

In Provence, these days are called Les Jours de la Vache (Li Vaqueiriéu – franco-provençal dialect) and happen at the end of March, beginning of April. Similarly, an old lady thinking that winter is gone takes her sheep to graze and defies February:

February borrows three days from March and brings upon the old lady a freezing cold that kills her sheep. But in this version of the legend, the old lady is  persistent, she buys some cows and repeats her errors, thus angering March, who in turn borrows days from April and kills her cows.  Ever since, the last days of March are called the Cow’s Days.

In Fribourg (Haut-Intyamon), Switzerland, the story is similar: once upon a March, an old lady who had a goat by the name of Rullion, had  no more hay to feed her goat. The weather was good and the grass was starting to grow. She decides to spite March and take her goat to graze the pastures. In response, March brought bad weather so the old lady and her goat had to seek shelter in the woods. The original version as it was collected in the XIX century is here.

In the Swiss version she and her animals live, and I decided to give her the chance to make a comeback, only with a vengeance. Contemporary Rullion is badass, she uses the MeteoSwiss app to check the weather but she has other meteorological gadgets for emergencies, such as the drone, and as a last case scenario she can tap into NASA satellites. If it gets snowy, she is always ready to put on her skies and descend her animals to her safe-house. 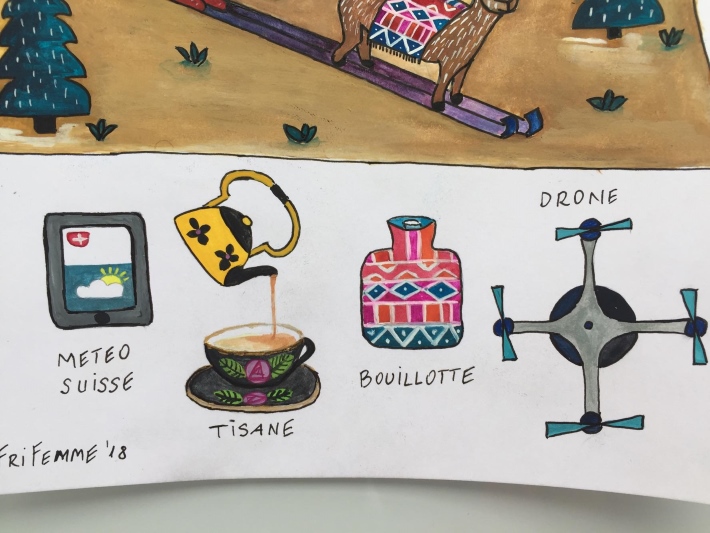 From the west (Borrowed days, Les jours de la Vieille) to the east (Zilele Babei, Babini dini, Babin mraz, Berd ul’-aguz, Ayan ul’-aguz) this old lady must have made an impression on people, since her legend crossed so many cultures.

And as the swiss proverbial saying puts it:  “les dza a la villë xon pâ oncô paxâ” (Fribourg old dialect), her days are not over yet.

This illustration is available for sale in my shop.