Sometimes I find it frustrating that Lausanne, Geneva or Zürich have more to offer to children from the cultural point of view than Fribourg, especially on Wednesdays when I am out of ideas what to do with FriBoy. The good part is that in Switzerland these distances can be easily covered.

The Haute Ecole de Musique de Lausanne organize occasional music shows for children.  So we took the monkey train and went to Lausanne to see La Nuit des Mayas music show. I was impressed to discover the HEMU pedagogical file  which parents were to consult together with the kids in preparation for this show and where they introduced the music and some activities meant to bring children closer to understanding it.

It was above my expectations to say the least. They performed classical Mexican music on the theme Dia de los Muertos, in a theatrical and fun way which the children appreciated very much.

They engaged the children with the music, every kid had maracas which he could use at certain moments to support the orchestra, they let them move on the stage while the musicians were playing and even conduct the orchestra. 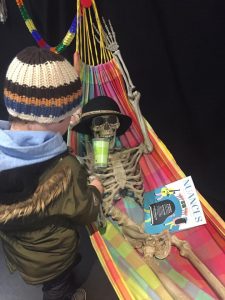 Check out the HEMU program here.