Tomorrow, the 13th of December, people in Scandinavia and in other parts of the world (Italy, Croatia) celebrate Saint Lucia. I particularly like the Swedish tradition observed on this day and I decided to honor it with an illustrated interpretation and by baking the delicious Swedish Lussekatt, a sweet saffron bun served on this occasion.

St. Lucia Day is dedicated to Saint Lucia of Syracuse, one of the first Christian martyrs, persecuted during roman emperor Diocletian’s time. Born to roman nobility,  around 283,  Lucia had consecrated her virginity to God  in spite of the fact that her mother arranged her marriage to a young man from wealthy pagan family. And similar to Saint Nicholas, she wanted to give her fortune to the poor. In Scandinavian imagery, she is represented as a young girl dressed in white wearing a crown of evergreens and candles on her head. Legend has it that Saint Lucia gave food and helped Christians hiding from persecution in Roman catacombs, wearing a crown of candles on her head to light her way.

While in other countries Saint Lucia is no longer a central figure of Christianity, in Sweden she never lost her popularity due to the fact that in this Nordic part of Europe, her celebration has a special meaning that makes sense to people even to this day, the celebration of light – Lucia – from latin lux = light. In the pre-christian era, during this time of the year, pagan Germanic people celebrated the winter solstice – Yule, the precursor of Christmas. Similarly to Roman Saturnalia and Dies Natalis Solis Invicti (the Sun’s birthday, nowadays Christmas Day), the celebration of Jesus’ birth replaced the pagan renewal of time and rebirth of the sun.  Gradually, Saint Lucia’s Day became the festival of light and together with Advent this day marks the beginning of Christmas.

In Sweden, on this day, the youngest daughter of a family will wake up early in the morning, put on a white dress with a red sash and a crown of candles on her head and serve lussekatt (a type of sweet bread bun of various solar, zoomorphic and anthropomorphic shapes) and coffee to her parents, a reminder and possibly remainder of the ritual food offerings of the pre-christian Yule.

The contemporary form of this celebration is a spiritual pot-au feu of various christian and mythological elements and goes back to 1927 when a Swedish newspaper organised the first official procession and chose a Santa Lucia representative. Today almost every city and school has its own Santa Lucia procession. The chosen maiden is accompanied by other girls wearing similar attire, the star singers, the tomte/nisse and even gingerbread men.

The stars singers is a tradition that originated in medieval times and which consisted in singing and performing religious plays during the time between St. Stephan (the 26th of December) and the Epiphany, going door to door asking for money or baked goodies. At the end of the XIX century, this form of “begging” was shunned and lost its popularity, only to make a comeback nowadays during the Santa Lucia procession.

The tomte or nisse are Nordic mythological creatures taking humanoid half people form, popularized at the end of the XIX century as small white bearded men. A remnant of an ancestor cult, they were the protective spirit of a house, watching over the household, protecting the family and against bad luck and misfortune, especially at night when everyone was asleep.

Starting with mid XIX century and under the increasing influence of Santa Claus, they were credited with bringing gifts to children, a role previously held by the Yule goat, an ancient figure from Nordic mythology whose origin goes back to pre-christian beliefs when the god Thor traveled through the sky in a chariot pulled by two goats, Tanngrisnir and Tanngnjóstr. Another theory links the Yule goat to a larger Indo-european solar/agrarian cult. In Sweden, the last sheaf of grain from the harvest was credited with magical properties and was used to make a straw goat, a custom which survived today as a Christmas decoration and in the Swedish Gävle goat tradition. Read more about it here and here.

In Eastern Europe (Slavic countries, Romania) remnants of this cult can still be seen in the form of ritual songs and goat masked dances performed at Christmas.

In Sweden a special type of bun is baked and served on this they. They are spiced with cardamon and saffron which gives them the yellow color of the sun and the shapes are also symbolic of an ancient solar celebration.

To make my lussekatt I used Swedish chef Magnus Nilsson’s recipe from the Nordic Cookbook. See his video below.

Additionally, I added some orange peel and vanilla sugar as I thought it would go well with the cardamon.

Grind the saffron threads to a powder and add them to the vodka. Leave overnight to infuse. Combine the milk, the butter, the saffron and the spices in a small pan and heat until the butter has melted. Leave to cool down at room temperature and dissolve the yeast into the milk. Sift the flour in a large bowl, add the milk mixture, the egg, the sugar and knead the dough until it becomes elastic and no longer sticks to your hand (about 10 min). Cover and let double in size. Roll the shapes you want and place them on a baking tray lined with parchment paper. Cover with a clean cloth and let rise until double in size.  Brush with an egg  and milk wash (1 egg + 50 ml milk). Place the raisins in the spots as shown in the image above. Bake for about 20 min at 180 degrees. 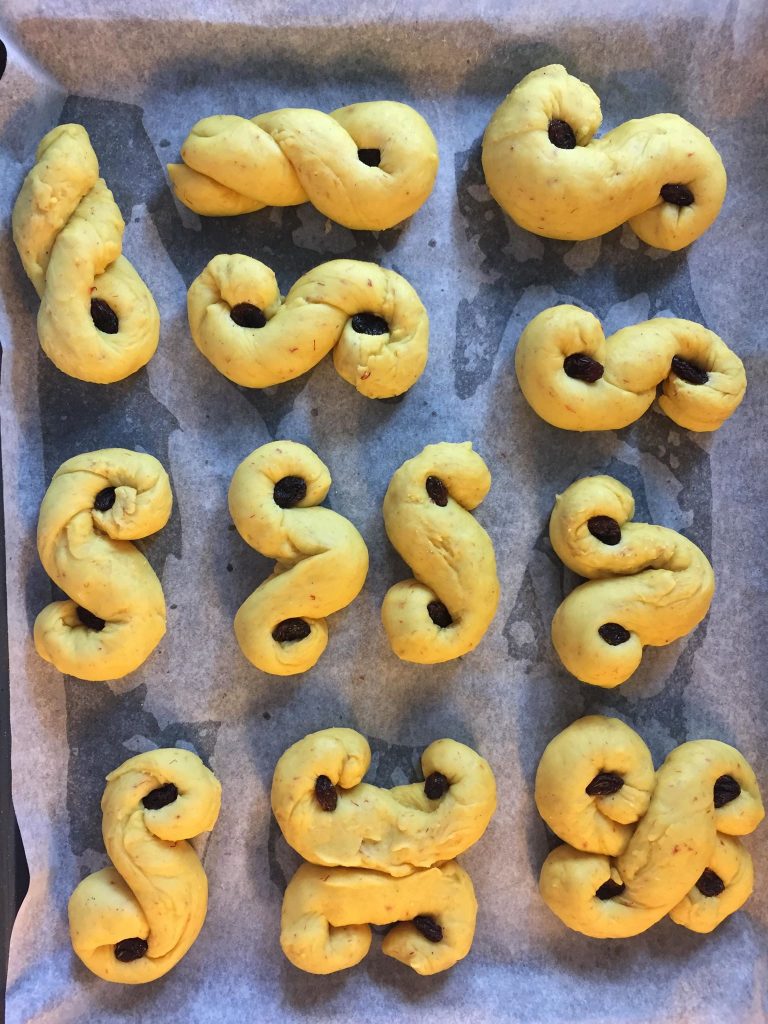 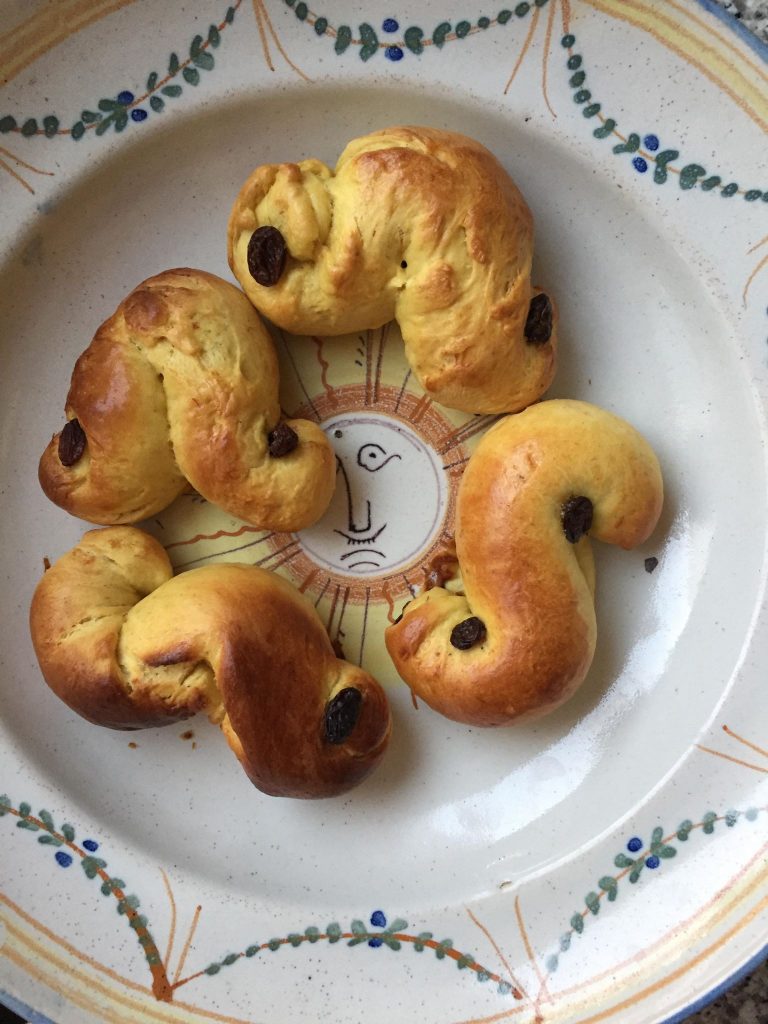 God Jul and may light always find its way into your life!

Illustration available as art print in my shop. 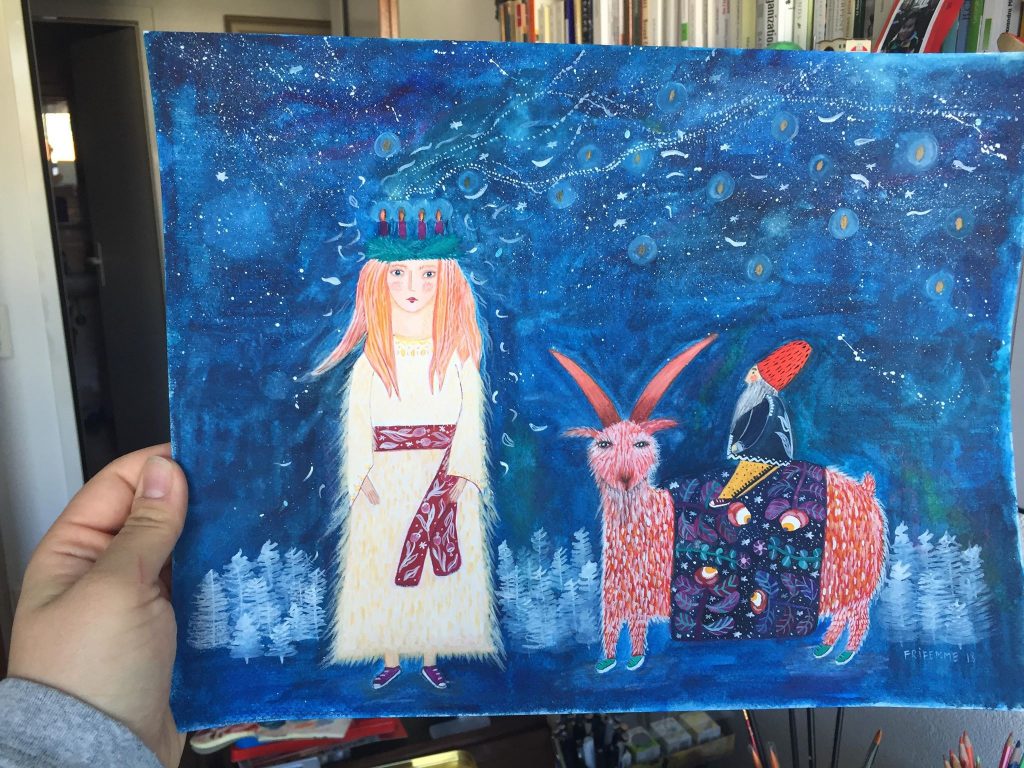 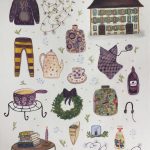 Recipe for a cozy winter 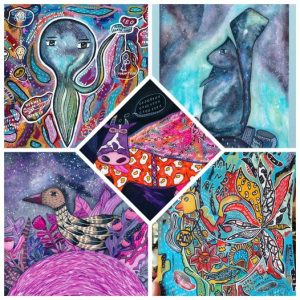 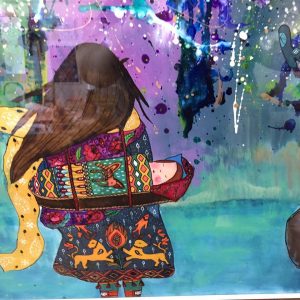