Today Christianity celebrates Epiphany, or the revelation of Jesus Christ to humanity. Since living in Switzerland I tough that the catholic feast of the Three Kings was something else entirely than the orthodox one I was used to, Boboteaza = Baptism.  It took me a while to understand that western and eastern Christians actually celebrate the same idea, the revelation of God incarnated as Jesus Christ and his manifestation to the world.

However, even if the purpose is the same, this religious feast is one of the major differences between eastern and western Christians. For the catholic church the feast commemorates principally the visit of the three Magi to the Christ Child and thus his revelation to the Gentiles, while for the orthodox church this revelation happens when Jesus is baptized in the Jordan river by John the Baptist, an event seen as his manifestation to the world as the Son of God.

In Romania this is the day when priests bless waters both inside the church and outside (rivers, the sea). The holy waters blessed during the religious service are said to maintain their freshness all year long and to have healing powers. Thus, people will queue in front of the church to fill their bottles with holy water, sometimes creating stampedes and even getting injured because it is believed that the quicker they get to it, the better it is.

The blessing of running waters is also a major event where the whole community participates. It is believed that people who dive this day in water that has been blessed will be healthy and lucky throughout the year. This water is also credited with healing the sick. In some places, the priest throws a cross into the water and young men will dive and race to be the first to retrieve it.

In Switzerland, the Three Kings Feast is celebrated by a thematic procession led by the three wise men. In Fribourg this parade is particularly special because of Hubert Audriaz, a local artist who created the Epiphany trail in his own back yard. “If you come across a man on a moped in Fribourg, his hair blowing in the wind, it is Hubert Audriaz! This painter has become the symbol and spokesman of the Basse-Ville district of Fribourg as well as that of a spirit and culture known as Bolze.” Here is a post and some photos from last year’s Hubert Audriaz Epiphany Trail.

People also bake a special  bread called the Three Kings Cake where a good luck charm (a broad bean in ancient times, nowadays a ceramic or a plastic figurine) is hidden. The person who finds it gets to wear a crown and be king for a day. This is an old tradition going back to Ancient Rome and observed throughout central and western Europe, which died out at some point in time. During the Roman Saturnalia festivities the world order was turned upside down, slaves could become masters and enjoy their privileges. They would play a game which consisted in hiding a bean in a sweet leavened type of bread and whoever found it became king, but only for one day.

This custom was successfully revived by Max Währen, a Swiss historian of bread, in 1952. Based on his years of research, he came up with a type of brioche similar to what was being produced in Europe in the Middle Ages (when it was still celebrated this way) and introduced it to Swiss bakeries from where it spread and became a popular national dish associated with this holiday, exceeding his expectations.

In Romania the culinary traditions are quite different, on the eve of Epiphany people fast because it is considered good omen. Thus, the main dishes which will also be blessed by a priest are vegetarian: boiled wheat porridge sweetened with honey, poppy or hemp seed cake, cabbage pies or dried prunes.

In my family we observe the Swiss traditions. It’s the Hubert Audriaz enchanted Epiphany trail which made this holiday special. Plus, I love the Epiphany cake and Friboy definitely loves when he gets to be king.  He took his role seriously, it was highly amusing to order us around. He even made us build him a huge fan and take turns in using it. 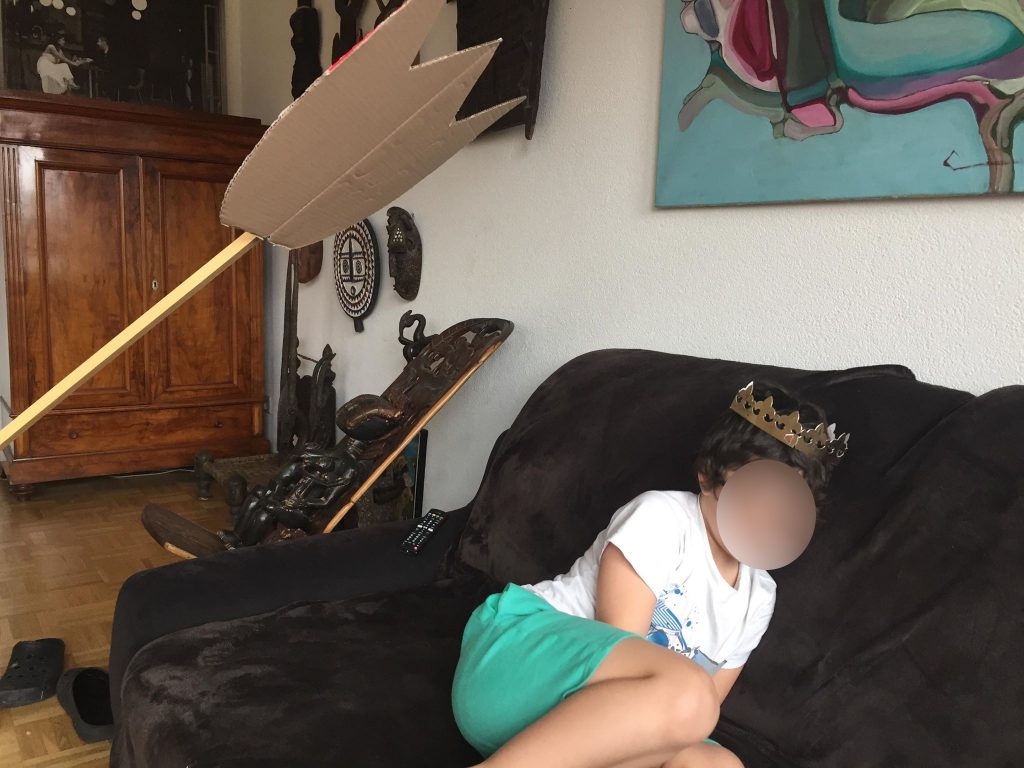 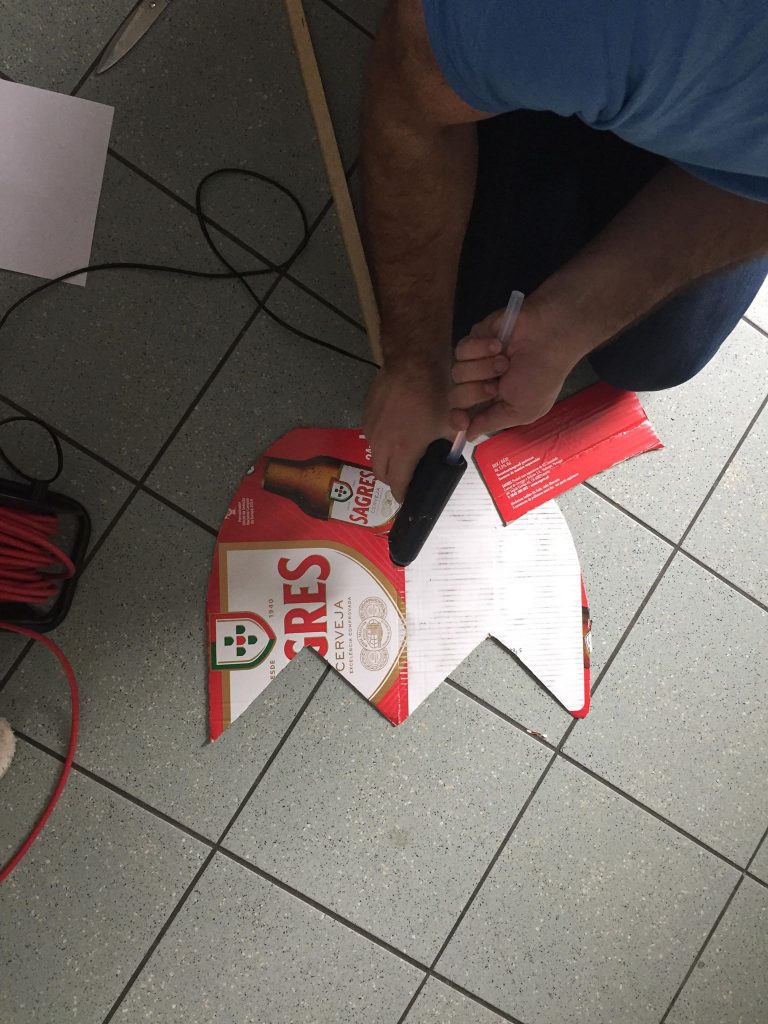 Fanning is something highly associated to slavery both in ancient and more recent times.

For the three kings cake I used the Migros recipe:

Slowly heat the milk together with the sugar and the butter and mix everything until the sugar dissolves. Let it cool at room temperature. Sift the flower, add the yeast, the milk mixture, the egg, the salt and the raisins. Knead the dough until it becomes elastic and no longer sticks to your hands (about 10 min). Cover it and let it double in size in a warm place. Divide the dough in 9 pieces with one of the pieces bigger than the rest. Assemble like below. Brush with the remaining egg and sprinkle sugar or almond flakes. Bake for 30 min at 180 C (using the fan). 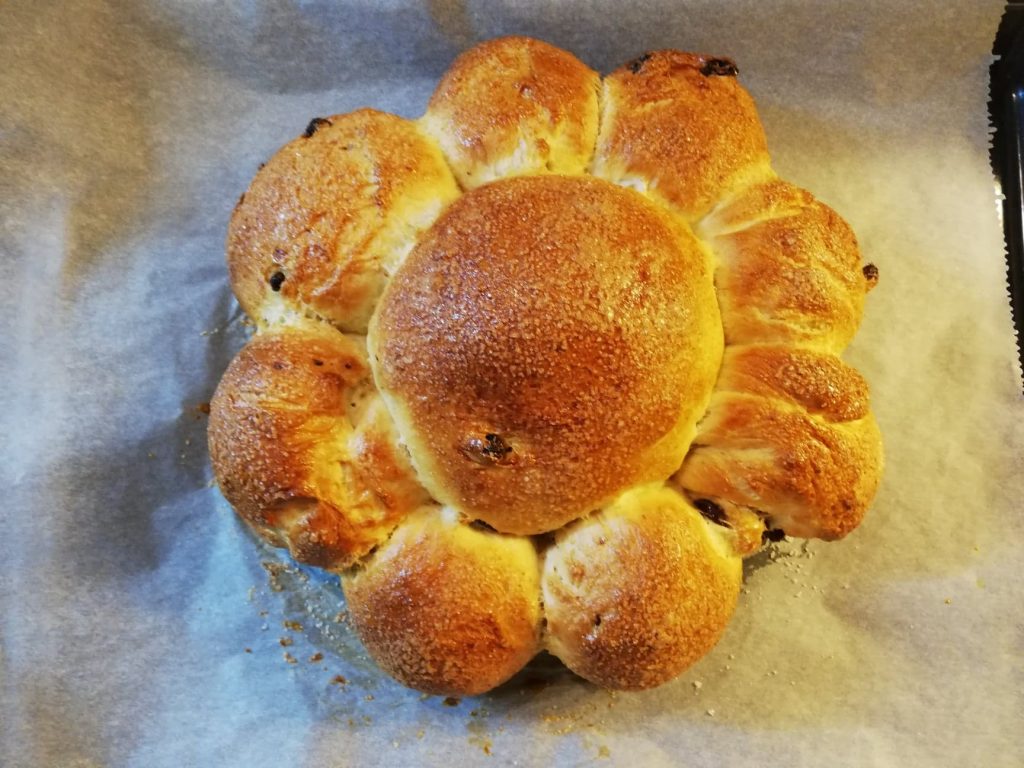 In some parts of Switzerland, children called Star Singers dress up as the three wise man, angels or sheep headers and go from home to home to sing and share the news of the birth of Jesus. This custom goes back to the religious theatrical representations of the Middle Ages.

In Romania, there are a lot of superstitions related to this day originating in the ancient pagan beliefs of time renewal, which somehow survived and make the salt and pepper of this holiday. On Epiphany day love spells are more powerful and unmarried girls are more likely to predict if or when they will get married. To achieve this a girl can do the following:

I never did all this stuff, although my maternal grandmother was quite superstitions. However, I do remember putting a piece of basil under my pillow when I was a teen. 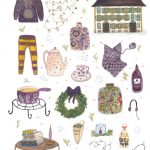 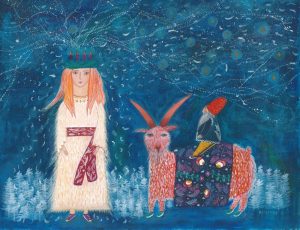